I’m Casey Peel, a gay nerdy tech guy. My husband Daniel Nidzgorski and I live in beautiful Seattle, WA. (I’m not the Casey Peel who is the photographer in Colorado or the one that is the MMA fighter.)

I volunteer as a developer and system administrator at Distributed Proofreaders, the largest contributor of public domain ebooks to Project Gutenberg.

kence.org is the nexus of my digital presence on the internet. Check out my resume (PDF), contact me at any of the social media options above, or send me an email (first initial + last name at this domain).

This weekend started my week-long staycation and I jumped right into the baking and throwing.

In the kitchen I decided to conquer the fabled braided crust after being inspired by my friend Habib’s beautiful crusts and a pumpkin pie seemed perfect for the season. Despite a panicked moment where I forgot how to braid (seriously brain?) it turned out really well! I see more of these in my future. 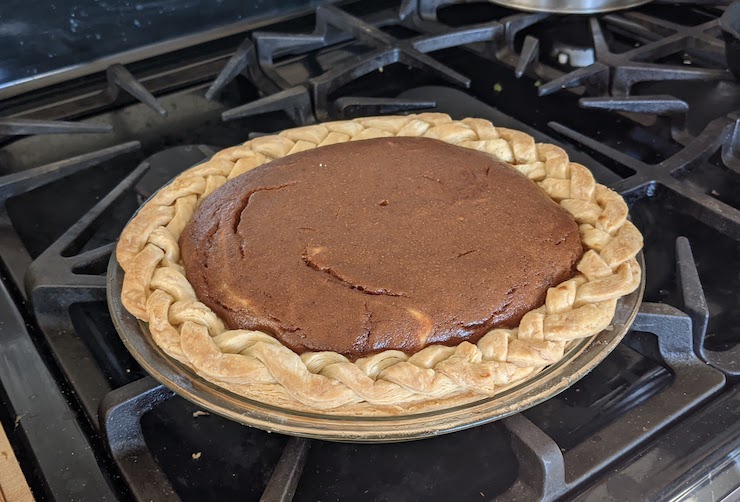 In the pottery studio I trimmed the spoon rests and small bowl I threw last week. This was easy and uneventful just as I was hoping it would be. I then started into the three pieces that we need around the house: a tea steeping lid for Daniel and pots for our two carnivorous plants.

After brewing his tea, Daniel has been using plastic take-out container lids on top of his mugs. This will never do – we are not barbarians. I mean, how hard can it be to make, it’s essentially a small plate with a rim. Clearly a plate thrower I am not because I re-learned the lesson: throw plate-like-things on bats. After throwing bowls for so long I got use to throwing them directly on the wheelhead and you just can’t with plates and get them off intact. Lesson (re)learned.

We have two carnivorous plants in the house which are both pretty and help keep the fruit-flies in check. Unlike other plants, carnivorous plants need to sit in water. For both plants we’ve been using, again, random plastic containers we’ve had available so I set out to throw some short wide cylinders for them. We will probably still keep them in the black plastic pots — the last time we tried to transplant some it went poorly — but it’ll be a step up.

I opened up into the Pine Lake White clay and it threw like a charm. It’s much less groggy than the Columbia White and I’m looking forward to throwing some more with it.